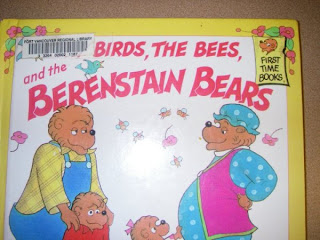 Well, let's just say "B" day got a late start because staying in Bed was so Beneficial. Tim had great ambitions of getting up at 4:30 and Baking Bread. Phew! It's Sunday! But we did turn out 5 loaves of Bread today, 3 loaves of whole wheat with sesame seeds on top, and 2 loaves of Banana Bread. We shared one loaf with some new neighbors we have across the street...who knows what they'll think of us now! I hope they don't wear dentures, that Bread was pretty chewy...
After taking a Bath and Brushing our teeth we were ready to Bound over to find some Blackberry Bushes! It was slim pickins since most of them were Baked in the sun already. We saw lots of little Garter snakes, but we'll save those for "Ssss" day. Eeeek!
Tim had a visit to the Barber (none other than his Beautiful Bride). Now his "Burns" are less Bushy.
So, too bad we weren't more hungry - we could have eaten Boston Baked Beans, Brussel sprouts, Baklava, Boiled Beets, Borscht, Brazil nuts, Broccoli, Bagels, Boullion, Basil, and B'sketti.
Besides Braving Beligerant, Bossy Boys...(Beyond Boring) Both Babes (Tim and Laura) Became Bold and Brakish, Belittling Bedtime...
Ok, that was too much!! We decided to cut "B" day short and take a walk around the Block, ending up at the library where we read Berenstain Bears.

It was a good day, ending with another Bath and Bedtime Books.
(We're very thankful that Cousin Chris was saved while Climbing, but we'll save the rest for "C" Sunday!)
Posted by timgineer at 5:02 PM