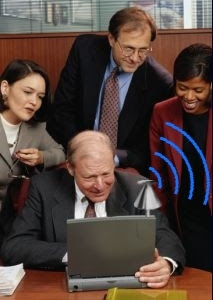 Why Use a Discone Antenna? The discone antenna is best suited for a situation where a true omnidirectional pattern is needed. The gain (8 dB over the internal antenna) is several dB higher than competing omnidirectional designs such as the co-linear and construction is much simpler because matching sections are not needed. The ideal situation for this antenna would be mounted on a tower or tall structure to provide access 360 over a full degrees. The design is inherently stable both electrically and mechanically. The device is small for reduced wind-loading and impedance changes due to ice or rain on the antenna are minimal especially if enclosed in a shroud such as a 2.5" PVC pipe. If you are looking for a point to point connection, take a look at Dr. Frohne's recycled Primestar dish and other designs. 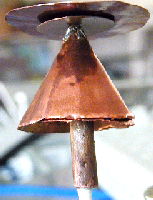 Our Goals It was our goal to implement an antenna for the 802.11b (Wi-Fi) specification. This covers the frequencies of 2,400 MHz through 2,440 MHz. Our goals were to achieve a higher gain than the internal card antenna located in a common PCMCIA wireless card, smaller size and greater portability than current external antennas and omnidirectional for use in a mobile environment. We also tried to keep costs under control. 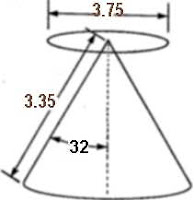 Our Results Our gain was as high as 8 dB over the best gain of the internal antenna in the Lucent Bronze card. Our overall dimensions were 3x3.75x3.75 centimeters. We fed our antenna using 50 Ohm thin coax and connecters rated for 2.4 GHz, probably available at your local Radio Shack with the exception of a special pigtail that can be purchased from nearly any wireless networking vendor. The antenna was fabricated from a short section of copper (water) tubing often used in plumbing, copper foil and a piece of copper thin single sided copper board (fiberglass board plated with copper on one side). Fabrication from aluminum may also work well provided a suitable insulator electrically separates the disk and the cone (like a rubber stopper). Our final impedance was 56 + j 7.5 and resulting SWR was calculated at 1.4 using a slotted line.

Building a Discone In building a discone we adapted plans from the ARRL Antenna Book 19th edition for building an HF discone. They suggest using an angle theta of approx. 64 degree angle on the cone and 7/10 ratio of disc diameter to bottom of the cone. The hypotenuse of the cone should be approx. 246/(frequency in MHz) feet. after building a discone of these dimensions, we discovered that by increasing the size of the disc slightly we could decrease our SWR greatly, while only slightly decreasing radiated power (less than 1%). This was discovered on the slotted line using aluminum foil to alter the dimensions of our antenna to optimize the SWR. You may notice the little disc in the picture above. This was our original disc that is fiberglass on the bottom and copper foil on top. When we moved to a larger disc, the old one was retained because the fiberglass on the bottom functions as an insulator to keep the disc from touching the cone. Any insulator will do here, a second disc is not needed.

To construct the cone:

Tuning and Testing Tuning and testing is an important step to maximizing the "coolness" of your antenna. Remember that antenna building, especcially at microwave frequencies remains highly a "black art" and nearly always requires some tweaking for maximum performance. A good suggestion would be to manufacture several discs and cones to use for testing purposes. Another neat idea is to use aluminum foil that will easily bend and is readibly availible at the grocery store for testing purposes. There are several varibles that are availible for tweaking. In most cases if your antenna works okay try messing with just one. If it is hardly working at all change a couple. Keep in mind this is a reiterative process (and can be lots of fun). 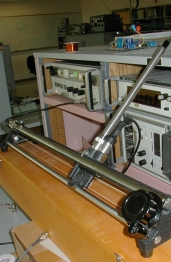 Thanks to:
Dr. Rob Frohne -- Advice and rather effective encouragement to finish our project.
Ralph Stirling -- Letting us borrow his yagi and adapters for testing.
John Ash -- Letting us borrow his yagi for testing. Advice on choosing a testing program.
Seth McNeill -- For mocking our deisgn. Ha Ha it worked anyway!
Greg Kittle -- For being a wonderful grader and for all the extra credit we are getting for saying that!
David Paden -- For being such a great supervisor and picking up after Tim. Incredible insight and making all of the lousy ideas go away.
Tim Kyle -- For leaving parts all over Chan Shun. Oh yeah... and on a job well done.
Posted by timgineer at 9:09 PM