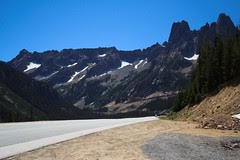 This morning we used the nifty Citrix access at Ciderworks on my work computer to check my e-mail and found out that the Walla Walla job was posted. I had the paperwork filled out so we filled in the appropriate numbers and stopped in Pateros to put it in the mail. We drove through town (it isn't huge) and couldn't find it anyway so we stopped by the hardware store at the edge of town. I asked where the post office was and they laughed, then told me to go out the door toward the alley. Next door was the post office, however you'd never know it from the road. All of their signs were only visible from the alley. Anyway, I got it mailed. Laura and I are now headed toward Hope on the North Cascades Highway. We planned to make a day of it (you kinda have to, it seems to always be under construction, somewhere). About 3/4 of the way up we stopped at a snowbank and took some pictures. We all took turns sliding down the bank, even Peter. Peter appearently had a more exciting time than we thought. Shortly after returning him to the car, evidence of his first five-alarm diaper began pooling in the bottom of his carseat. 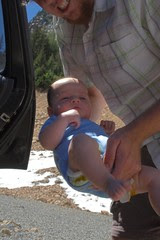 In contrast to the Portland to Yakima leg, Peter has travelled expertly. Sleeping for 3 or 4 hours at a stretch in the car, waking up to eat when we stop and jovially providing entertainment when awake.
Posted by timgineer at 5:21 AM